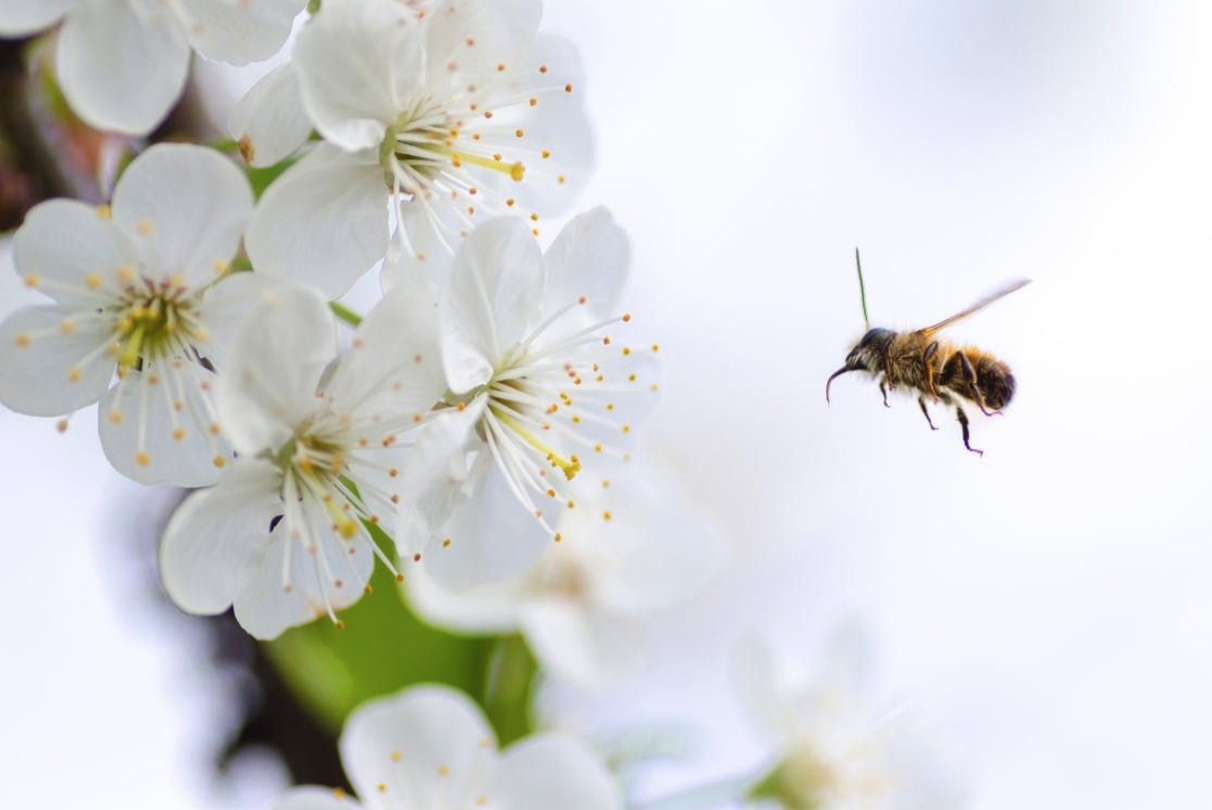 A lot of us are tricked into thinking that hay fever is only an issue in the summer months,
but if only that were the case! Some trees start releasing pollen as early in the year as
January, while a great number of plants release it right up until the end of September.
Pollen surrounds us for the vast majority of each year, so if that’s something that affects
you, it’s time to read up!
Check out the pollen calendar from Piri Allergy below to see when different plants are
producing pollen! 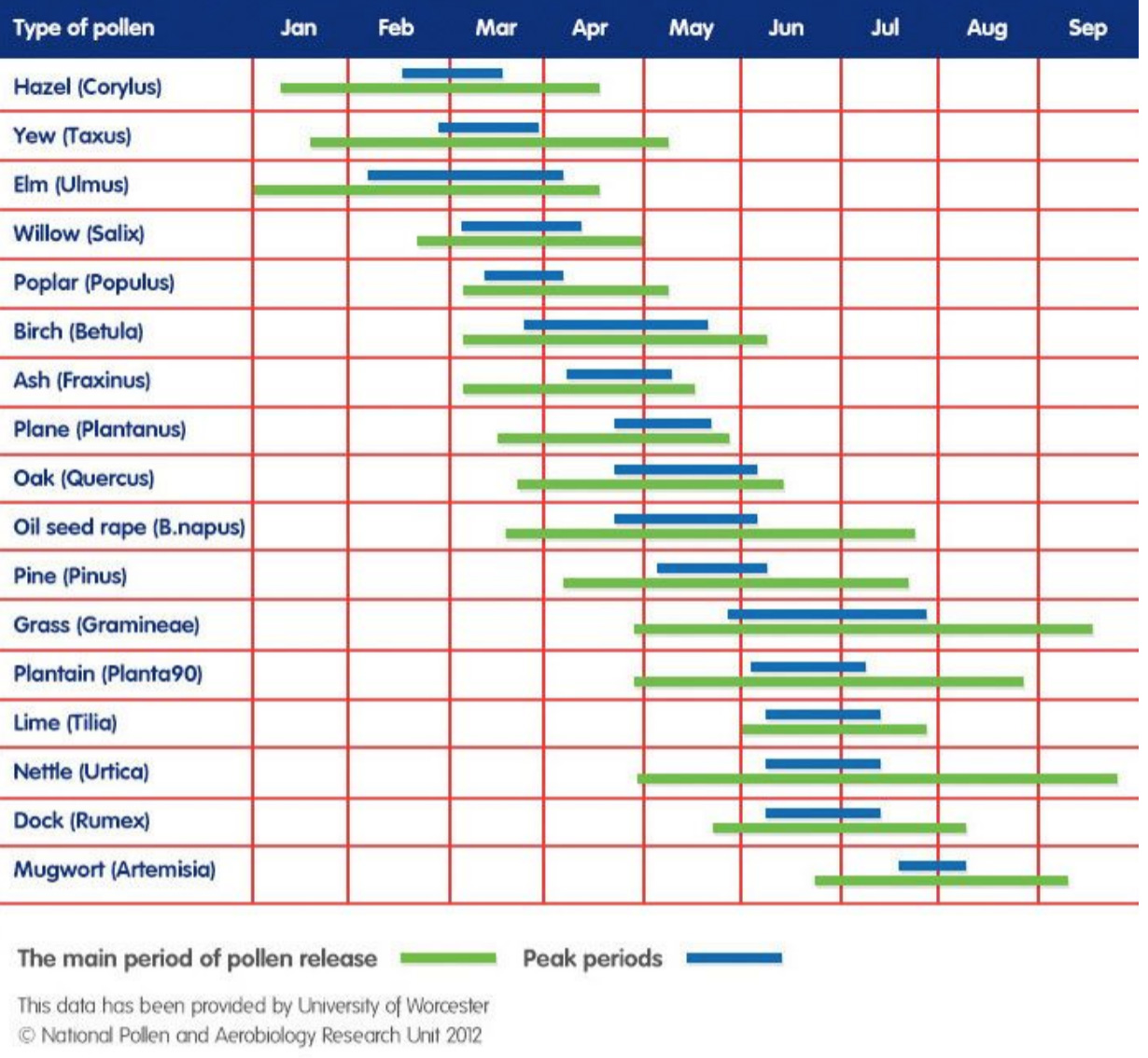 What Is Pollen?
Pollen is the name used to describe all of the tiny grains a plant produces for fertilisation.
Some plants like grasses, trees and certain weeds produce a large amount of light pollen,
which is spread by the wind. Other plants, especially those with brightly coloured flowers,
produce only a small amount of sticky, danse pollen that gets spread by insects and birds.
We really only need to worry about wind-pollinating plants, as these are the ones that
create an issue for people with asthma or hay fever.

How Do I Know If Pollen Is an Issue for Me?
One handy way of finding out if pollen triggers your asthma symptoms is to keep a diary. If
your symptoms often seem to be worse at certain times of year, or after spending time in a
garden or field, it could suggest you’re allergic to pollen.
Some websites have handy “pollen forecasts” which can be really helpful. If you take a note
in your diary of the pollen count each day, you can also work out if a high pollen count
worsens your symptoms.

If you discuss your symptoms with your GP, they should be able to figure out whether or
not you have hay fever. In some cases, your GP may refer you for a blood test or “skin prick
test” to find out what’s causing your allergic symptoms. If it’s decided that you do have hay
fever, they should also be able to prescribe you with the appropriate medication.

Thunderstorm Asthma
Sometimes the planets, or rather the weather conditions, rain and pollens, can combine
just right to trigger some very severe asthmatic symptoms. This is called “Thunderstorm
Asthma” and happens when rain droplets collide with airborne pollen and break it down
into even tinier particles. The smaller particles are better at getting deep into your lungs, so
they cause an even worse asthma response.

How Does Hayfever Make My Asthma Worse?
Hay fever can present a real risk to people with asthma, especially when it’s caused by
grass pollen. Studies have found that the number of adults admitted to hospital because of
their asthma dramatically increases when there’s a higher concentration of grass pollen in
the air.

For the majority of people, pollen is pretty much harmless. However, in those with a pollen
allergy the immune system will overreact and produce a histamine. This is what produces
the symptoms of hayfever like irritated eyes, throat and nose. This is also what makes
asthma symptoms worse.

Some people with asthma have airways that are sensitive to cold and dry air, which can
cause symptoms such as wheezing, tightness in the chest, feeling short of breath and
coughing.

A blocked nose can cause a real issue for people with asthma. Generally, inhalation takes
place through the nose so that the air is moistened and heated before reaching the lungs.
When a blocked nose forces you to inhale through your mouth, the air that reaches your
airways is drier and cooler.

Am I Likely to Be Allergic to Pollen?
Pollen allergy, or hay fever, is very common indeed. Hay fever can develop at any age, but
young adults and teenagers are most commonly affected. Around 20% of people in the
United Kingdom have this condition. This percentage grows even higher in the asthmatic
community, with over 60% experiencing asthma symptoms triggered by pollen. In adults,
women and men are affected equally by hay fever, but in children it’s more common in
boys than girls.

If you experience hay fever and asthma, your asthma nurse or doctor may wish to add hay
fever medications to your asthma action plan.

Other Allergies Can Cause Asthmatic Reactions
Pollen isn’t the only issue here – many other irritants and allergens can trigger your
asthmatic symptoms. The most common culprits include…
❖ Other airborne allergens like mold, dust and animal dander;
❖ Smoking;
❖ Strong smells like house cleaners and glues;
❖ Certain medications, such as aspirin;
❖ Stress and emotional anxiety;
❖ Exercise (Note that this is an important part of a healthy lifestyle, with or without
asthma. Talk to your doctor about how best to exercise with your condition);
❖ Pollution;
❖ Viral infections of the respiratory system.

For more information about asthma, check out Need2Know’s Essential Guide to Asthma
which discusses the diagnosis and symptoms of asthma and looks at how it affects all age
groups. Understanding asthma is the key to gaining control of its symptoms and enjoying
your life more fully, whatever the pollen count!

During the current Coronavirus pandemic, it is more important than ever to keep your immune…

The treatment you’re receiving, the stage the cancer is at and any number of other…

When healthy cells in a testicle begin to change and grow in an abnormal, uncontrolled…